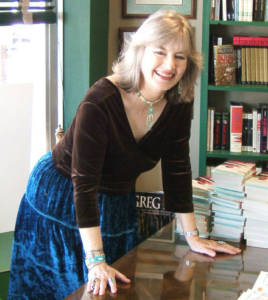 USA Today bestselling author Peggy Webb has penned more than 80 novels and is the most prolific writer the state of Mississippi has ever produced. This beloved and iconic author writes in multiple genres under multiple pen names. As Peggy Webb, she writes romance, women’s fiction, suspense and cozies. Her popular Southern Cousin Mystery series earned her the title “comic genius” from her peers. She writes historical suspense as Anna Michaels. Her novel, The Tender Mercy of Roses, earned accolades and garnered a quote from the late, great Pat Conroy, who called her work “astonishing.” As Elaine Hussey, she writes literary fiction. Her novel, The Sweetest Hallelujah, was compared to To Kill a Mockingbird.

A former adjunct instructor at Mississippi State University, Peggy likes to describe herself as “Southern to the bone and a pillar of the church and community.” Her friends
say she is as down-to-earth as the characters in her books and the roles she plays onstage at Tupelo Community Theater. She readily admits to being part Callie in the
Southern Cousins Mystery series and part Maggie in her Pulitzer nominated novel Driving Me Crazy (2006). She even confesses she saw herself in her stage roles as M’Lynn
in “Steel Magnolias” and The White Witch in “The Lion, The Witch, and The Wardrobe.” But she denies being the model for characters in Confessions of a Not So Dead Libido.

“I am compelled to write,” she says. “My muse won’t let me remain idle.” Peggy’s body of work is a stunning testament to her muse: more than 80 novels, numerous blues songs, more than
200 magazine humor columns and two screenplays.

In addition to her literary and mystery works in progress, Peggy is editing/revising her early romances. “I’m delighted to bring these timeless love stories back to you.
What fun to get reacquainted with feisty, independent heroines and strong, sexy heroes!”

This native Mississippian has seen millions of her books in print in more than 17 languages. Acclaimed by both fans and reviewers, Peggy’s novels consistently appear on bestseller
lists and garner awards. Among her awards are Reviewer’s Choice, Maggie, Golden Medallion, Wordweaving Award of Excellence, and the prestigious Romantic Times Pioneer Award. Dubbed
the Queen of Comedy by fans, Peggy forged the way for romantic comedy.

She went back to her comedy roots with her Southern Cousins Mystery series, fan favorite cozies that star Elvis, the basset hound who thinks he’s the King of Rock ‘n’ Roll reincarnated.
Her fans say, “To read a Peggy Webb novel is to howl with laughter.”

Her classic romantic comedies are also huge hits. Among those landing in Amazon’s Top Ten spot are the duo Touched by Angels and A Prince for Jenny, all five books of the Donovans of the
Delta series, the ground-breaking Duplicity, and the time-travel Night of the Dragon.

Although Peggy says she’s “just a small-town Southern girl who loves music and words,” she has a Bachelor of Arts degree from Mississippi University for Women and a Master of Arts degree
from the University of Mississippi. She is an accomplished pianist, a singer in the first soprano section of her church’s choir, a Master Gardener, and a prolific writer whom reviewers
call “one of the Southern literary greats.”